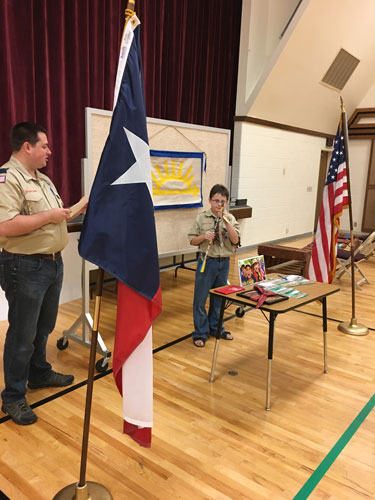 Fritz worked really hard and earned both his Webelos rank and Arrow of Light in 10 months. This allowed him to receive his Arrow of Light at the last pack meeting of the year before we break for summer.

He actually did more than necessary and completed all of the required and optional adventures in the book plus the conservation patch (and will complete the requirements for the Texas patch before he actually turns 11). 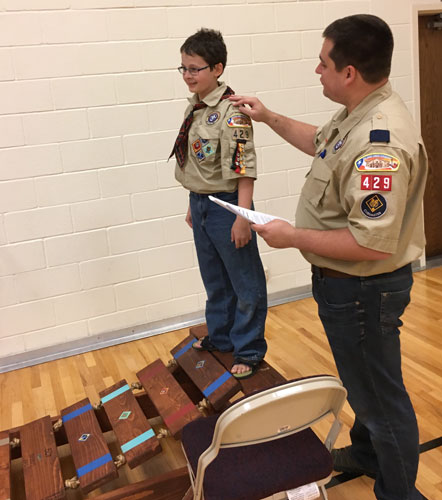 He was so excited to be able to finally cross the bridge from Cub Scouts to Boy Scouts and get his new neckerchief and slide. 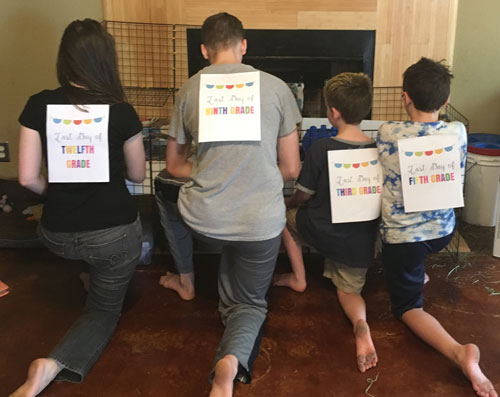 Yesterday was the last day of school for our 2016-17 school year. This means Ani is now a high school graduate. The year really seemed to go by fast, but we are still all very happy to have the next 13 weeks off. Usually, we do some work over the summer (math and language arts), but other than reading (for pleasure), we’re not doing anything but relaxing this year!

In science, we learned about the kingdoms. We filled in cladograms. We played with a dichotomous key. We learned about what happens to plants when they are exposed to acid rain. In history, we learned about ancient Greece, ancient China, ancient Japan, first North Americans, ancient South America, the Celts, and ancient Rome. We did some very interesting art projects. We continued doing taekwondo.

Cameron did math using Khan Academy. He wrote more essays (he’s happy to be moving on to creative writing next year). He read (listened to) The Odes of Horace, The Aeneid, and The Metamorphoses. He’ll be testing for his second degree black belt in a few weeks.

Adrian completed Math-U-See Gamma and then started working on 4th grade math using Khan Academy. It’s amazing watching him figure out the math for himself. He completed book 7 of Explode the Code. He’s gotten very good at marking spelling passages on his own. He finished Traditional Irish Fairy Tales and read Tales From Japan and Theras and His Town.

Fritz
English: A
History: A
Math: A
Biology: A
Latin: A
Art/PE/Music: Pass

Adrian
English: A
History: A
Math: A
Biology: A
Art/PE/Music: Pass 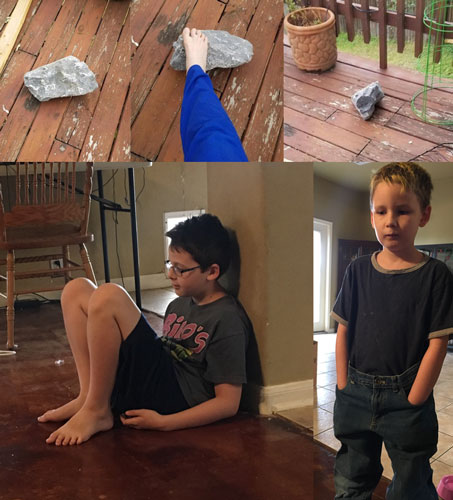 Proposals: The boys each had to respond to one of three proposals. Cameron assisted in discrediting Bishop Berkeley’s theory of the non-existance of matter. Fritz imagined his feet in a mountain stream. Adrian dressed like his father.

We started off May learning about Celts using Year 1, Unit 17 of Layers of Learning.

We looked at some of the pages from our Ireland trip scrapbook. 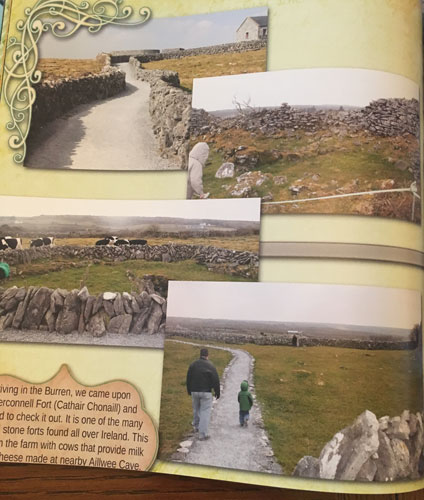 We colored a map of where the Celts lived. 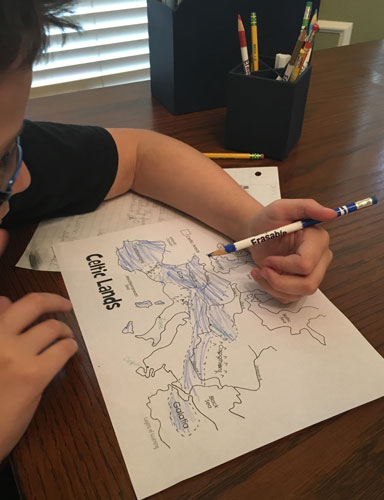 We learned about the Celtic calendar. 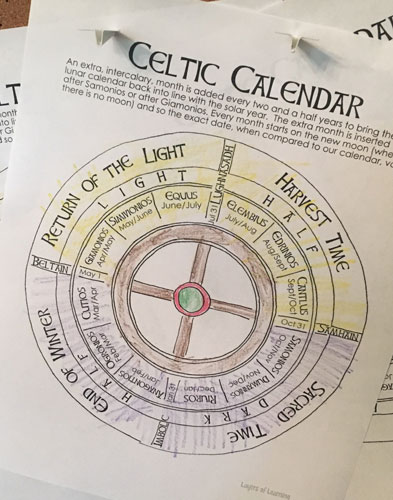 We made Celtic knots out of paracord. 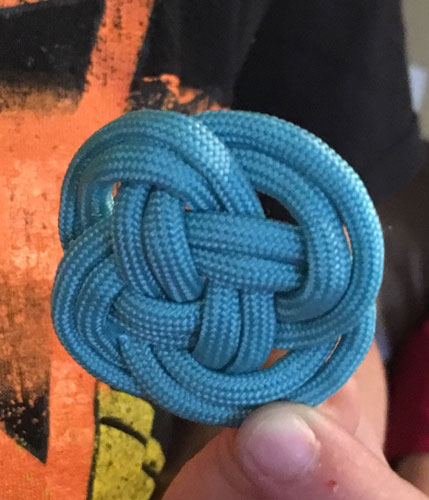 For the rest of the month (school year), we learned about Rome using Year 1, Unit 18 for two weeks and Year 1, Unit 20 the final week.

We colored a map of how the Roman Empire changed over about 150 years.

Each boy picked a different Roman god/goddess and drew them and then shared with their brothers about the god/goddess they picked. Cameron chose Ceres, Fritz Neptune, and Adrian Jupiter.

We learned about laws in the Roman Republic and the Twelve Tables. We discussed what attributes make a good leader. 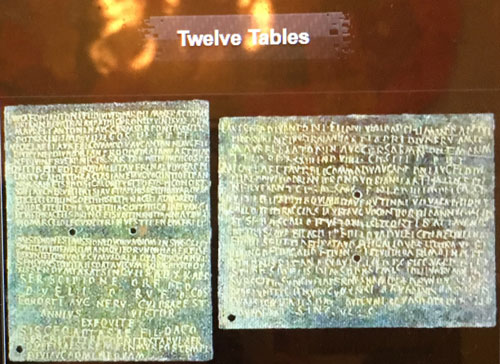 We learned about the Roman alphabet and wrote their names without the missing letters. 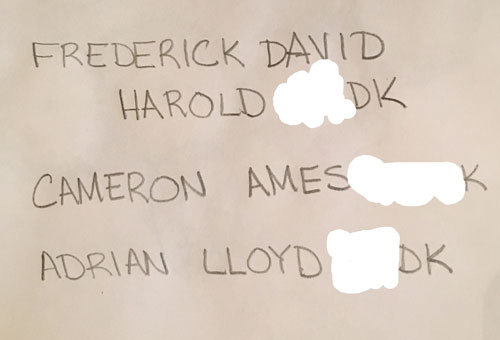 We learned about Horatius and Fritz acted out jumping into the water and swimming across with his armor on (apparently doing the backstroke). 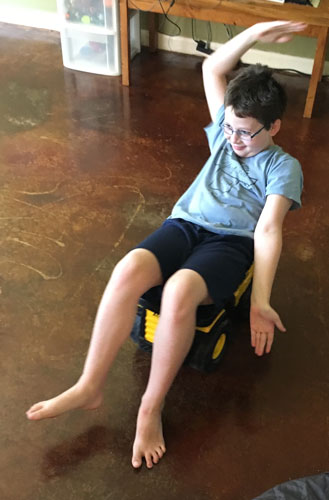 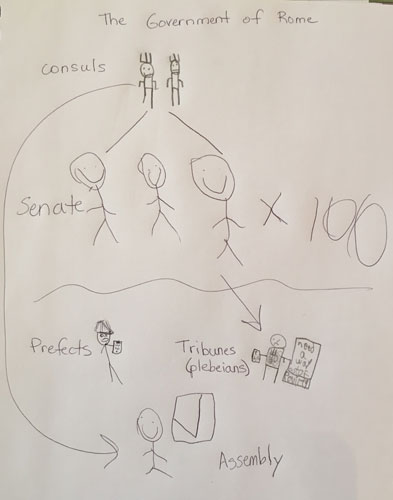 We learned about Cincinnatus and made a fasces. 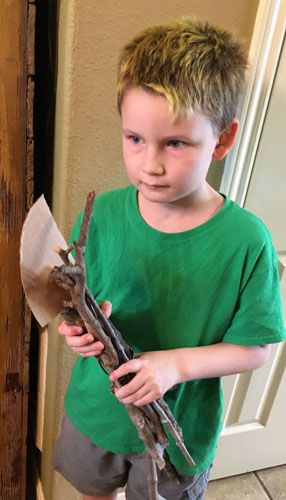 We learned about Roman roads and how some were even paved. We talked about what roads today are paved with. 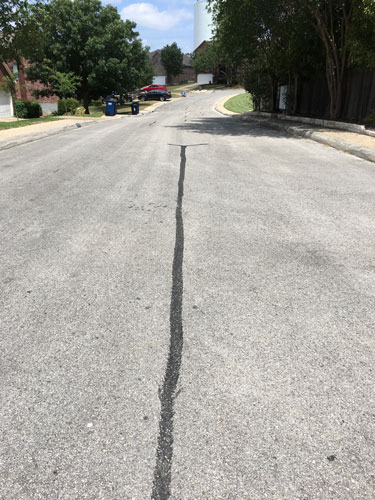 We learned about aqueducts and made one out of clay.

We learned about the Roman baths and took a virtual tour. 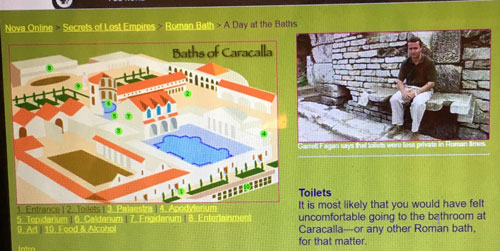 We learned about the fall of the Roman Republic leading us right into our final week learning about the Roman Empire.

We did mapwork to show how the Roman Empire shrank over time. While coloring his map, Fritz said, “I know where the Red Sea is!” and pointed right to it. So at least something has sunk in over the course of the year. 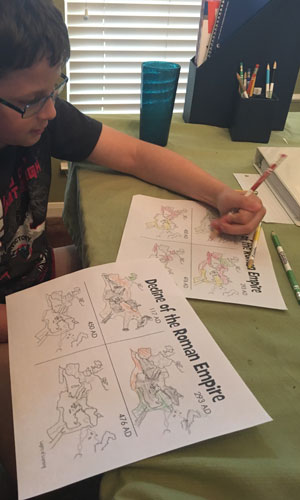 We learned the Pax Romana and dressed in togas.

We learned about Hadrian’s Wall. Adrian found his name inside the emperor’s. 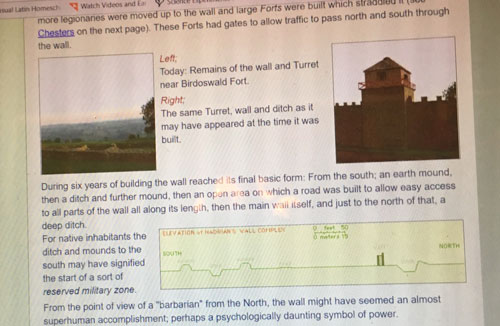 And, finally, we learn a little rhyme about the fall of the Roman Empire:

In 476, Rome was in a fix.
Little Romulus bid farewell
And mighty Rome fell.

Since Adrian finished Math-U-See Gamma a few weeks ago, he’s been using Khan Academy 4th grade for math. It’s been fascinating watching him play with the math problems to find the answers.

For example, a couple days ago he started adding and subtracting mixed numbers. He doesn’t like the watch the videos unless he really can’t figure out what to do (he says he gets bored and can’t pay attention). So he had never done anything with mixed numbers when he jumped right into solving the problems.

The most amazing thing happened. He figured out the easy ones very fast (these are very basic mixed numbers with the denominators the same). Then he got to addition problems that required him to add a one to the whole number and show what was left of the fraction. He got it wrong the first time, but quickly figured out his mistake.

The subtraction tripped him up a bit. He tried subtracting the wrong way (1-5=4). When that didn’t work he got the idea to borrow a whole number, but he still didn’t get it right. He finally asked for a hint and looked at the first two they gave him and then knew what to do. He borrowed correctly, subtracted correctly, typed his answer, and was even given a “grit” badge for keeping with it until he solved it correctly. After that, with a few mistakes along the way, he eventually managed to get 5 correct in a row.

It’s really fun watching him figure out the math for himself. He’s not afraid to get answers wrong so he’s willing to try and try and try again. Once he gets the concept figured out, it’s solid in his head. It just makes sense to him. Honestly, for this particular kid, letting him play with math and figure it out on his own works way better than trying to teach him how to do it (probably because of that previously mentioned “I get bored and stop paying attention” thing).

Ani’s been doing some digital art on my iPad. She’s just learning how so she’s been using pictures as reference for what she wants to draw. Because of this, sometimes some strange pictures show up in my photos on my phone (since it shares an account with my iPad).

The other day I was going through my photos and was highly amused by this picture of a gnome right before this picture of Cameron giving a private lesson at taekwondo. The similarities between Cameron and the gnome made me laugh so much. 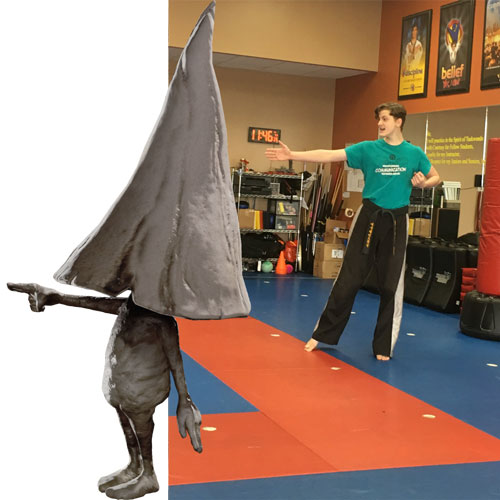 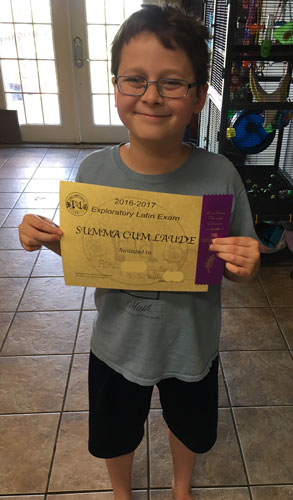 The other day I discovered that one of my favorite indie authors follows me on Twitter. It’s pretty awesome. Most of what I tweet are links to my book reviews on my other blog, including reviews I’ve done of her books.

This discovery started me thinking about just why I love indie authors so much.

1.) I get to be the gatekeeper for what I want to read. Traditionally, with books published via publishing companies, it’s those publishing companies that decide what is good and what isn’t. Make no mistake: There is a whole lot of independently published junk out there. December and January always sees a bit of an uptick of terrible books completed during NaNoWriMo (National Novel Writing Month which happens every November). But there is also a whole lot of amazing independently published books. Many of these authors give away the first in a series on Kindle. After reading that first book I am the one who gets to decide if I want to keep reading the series, find other books by the author, or never download anything by them again. Let’s just say some indie authors have been paid well for that freebie I downloaded!

2.) The cost is usually a whole lot lower. Rick Riordan is a traditionally published author and I enjoy his books. But I refuse to buy his new ones as they come out because I don’t enjoy his books enough to justify the $14.99 Kindle price. That is nuts. Indie authors generally run $4.99 or less per book. Often much less. A couple days ago I got a box set of 5 of one indie author I like’s books for 99 cents. (These are Kindle prices… I pretty much exclusively read on my Kindle because I just prefer it.)

3.) Probably because indie authors are not as well known, interaction with them is a bit more personal. They often tweet a lot. I’m on a Facebook group run by one indie author I like. She’s always having conversations with fans on there. Last fall another indie author I like was making his way across the US and stayed at our house for a couple days.

On Monday in religion the little guys were learning about the part of Joseph’s story where he’s in jail and the baker and butler have dreams and he interprets them and then two years later the pharaoh has his dream and the butler finally remembers that Joseph can interpret dreams. We had paper puppets and went through one chapter acting it out and then started on the second chapter and I could see I was losing the boys.

So I went on YouTube and Wikipedia because you can find anything on those two sites. Using Wikipedia, I figured out which songs from Joseph and the Amazing Technicolor Dreamcoat cover those two chapters and we watched about 15 or 20 minutes of the movie. The boys agree that the 70s dance party at the end of “Go, Go, Go Joseph” was a little weird, but I bet they’ll remember that part of Genesis better than they ever would if I had just read it to them while they played with the puppets.

The dishwasher that came with our house started leaking and wasn’t cleaning the dishes very well so we got a new one a couple months ago. I’m pretty sure GE called it an Adora because it’s totally adorable*. The only problem is I hate to run it at night because then I miss the cute little tune it plays at the end of the cycle.

*Possibly more importantly, it is not leaking, cleans the dishes very well, and is a whole lot quieter than our old one. The one we got has a tiny top drawer for silverware which is pretty cool. Also, instead of running our dishwasher 2-3 times a day, I only have to run it 1-2 times a day (usually 1) and the wash cycle is about an hour shorter than our old dishwasher (yeah… we were running that thing most of the time). Our water bill dropped about $25 a month because it uses so much less water, so that was an extra bonus.

Smaller on the Outside
Blog at WordPress.com.