Before Adrian started kindergarten, his goal was to learn to read. And I have to admit, after teaching three kids to read, the idea of outsourcing that job for fourth kid was pretty nice. After 5 months in school, however, he had only learned a handful of sight words he didn’t already know. So of course, at home, his goal is still to learn to read. And he is making incredible progress with a combination of Reading Eggs and Primary Arts of Language: Reading from Institute for Excellence in Writing.

PAL is kind of unique in that it teaches letter combinations right from the start instead of just the letters and their sounds. The very first lesson Adrian was taught what ee, the squealy e’s says. That’s the other fabulous things about PAL. There are stories about the letters. See, ee are such good friends, that when they are together they squeal eeeeee! a is angry because she has a ponytail and the boys keep pulling it and making her say /a/ (short a sound). k is the kicking letter (and the letter stories file folder game piece has feet) so it says /k/ like in kick. Stuff like that. Adrian loves those letter stories (even though he already knew the letters and their sounds before we started).

So far we are through 15 lessons and today Adrian was presented with the word down. The ow had been underlined to call his attention to them going together. He knew that when ow get pinched between other letters they say “ow!” He put that together with the sounds d and n make and he was able to decode the word very quickly.

Each lesson starts with a poem. This week we’ve been reading and discussing The Squirrel. Yesterday I had him close his eyes to visualize what was happening while I read it to him.

Then we do his writing lesson. Writing was a huge deal while he was in public school. He hates writing and it is hard for him (just as it has been for all of my kids at 5… because they are, you know, 5). He was most likely to act up in class when they were supposed to be sitting at their desks writing. So we opted not to get Primary Arts of Language: Writing (which is done concurrently with the reading program, but doesn’t have to be). Instead we do a writing lesson of my own creation and the amazing thing is, he doesn’t really resist! We start with a journal entry.

He tells me what to write and it has sure resulted in some strange journal entries. This notebook is going to be hilarious to look back on when he’s a few years older. Some examples:

Today’s windy with Mr. Wind. That’s it for today.

We’re doing the same today as last morning. There is something I want to talk to you about today. Well, I don’t need a seatbelt, but it’s a rule everyone needs seatbelts. Well, that’s the end.

After that, he does a handwriting worksheet. I have him trace dotted lines to make the words he learned the previous lesson. We’re still working on getting the pencil grip right (they tried the positioner thingy at school and he chewed it up).

When we were going through the letters of the alphabet (2-3 a day for the first several lessons), I had him make the letters using Wiki Stix on letter cards and also use the Magic Board with letter overlays to write the letters. Now that he has completed writing the letters, he has free access to these to play with them whenever he wants. 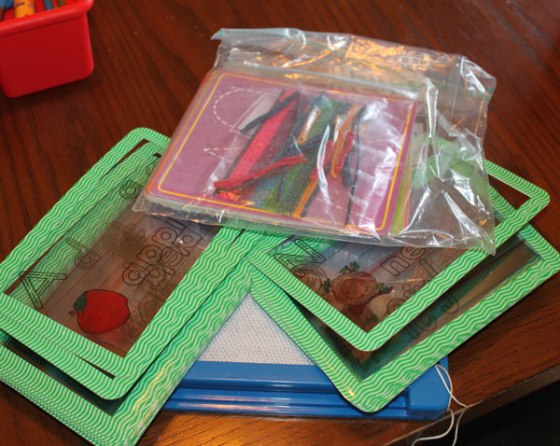 The next thing we do (2 or 3 times a week) is I read a story to him. Twice. Sometimes three times. He loves repetition. Then he tells me what happened in the story.

Next he does a few file folder games (at this point… it changes as they learn to read better). So far he’s gotten 14 of the 35 games. He loves these games! They range from putting letters in alphabetical order to sorting based on the vowel sound in the word to determining the initial consonant sounds in words.

After that, he gets his new word cards. Some of these are sight words. Some are words for him to decode and then learn them to be able to read instantly. Some are teaching a letter combination (like the “magic” silent e).

Each day we go through a few of the words in his stack. Some days we play lightning where he tells me what word is on the card as fast as he can (or, alternatively, slow lightning – a game he invented where he reads the word as fast as he can, but says it super slowly drawing out the sounds in it). Some days he “feeds” his cards to his Feed Me Monster as he reads them. According to PAL, it takes about 55 times for a word to get cemented in a kid’s brain so going through these words each day helps with that.

Then we visit the phonetic farm. Most days we have a sticker or two to add to it. Some days we just review some of the stickers we’ve already put on. The phonetic farm is truly awesome. It’s a visual way to see all the sounds letters and letter combinations make in different places in words. Every sticker has a picture and/or story to go with it to help him remember what the letters say.

Each day he has a work page to do. These involve reading words or phrases over and over and putting them in the correct place. Adrian has a very hard time cutting so I do that part for him. He likes doing the gluing.

Most days he has a reading practice page added to his binder. Days when there is no new reading practice page, he reads a previous page. In addition to the full page we pick a few sentences at random from the other pages to read as well. Depending on how long the lesson has been (lessons run 30-60 minutes of concentrated work) and how tired he is getting, I’ll read and have him repeat or I’ll ask him to find certain words or only have him read a couple sentences on his own. 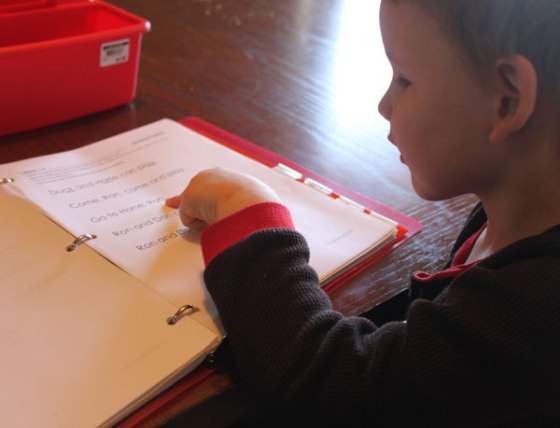 After that, we visit the phonetic farm again. We review every stick and location he has learned so far and take a ride on the train.

Finally, he has an informal spelling test. At this point we’re just doing letters and letter combinations. He uses the white board and write on/wipe off markers. Sometimes his letters get very creative and he tells stories about why a letter’s face looks like it does or why its hair looks like it does.

Several lessons ago he learned that A, E, I, O, and U are the vowels. We were instructed to put up a vowel ladder in a doorway that he uses regularly. We don’t really have any of those so we put the letters on the post between our living and dining rooms. The idea is that as he passes he’s supposed to hit each letter and say their names and/or sounds. He goes over to it several times a day still, a couple weeks later, to do that (bonus: Fritz apparently didn’t know which letters were the vowels and has learned them as well thanks to the vowel ladder).

I truly couldn’t be more thrilled with Primary Arts of Language: Reading. Adrian’s loving it and it’s really helping him easily learn to read.

One thought on “Learning to Read With PAL”