I’ve always thought I hated anything with pumpkin in it. It is true I can’t stand pumpkin pie, but then I don’t like pretty much any type of pie. I mean, I hate apple pie, but I like apples made other ways so I don’t know why it never occurred to me that maybe I’d like other things with pumpkin in it.

As it turns out, I do like pumpkin in non-pie foods. Last week Ani and Cameron made pumpkin cake (from a mix) and it was very good. Today they made pumpkin chocolate chip muffins (made with fresh pureed pumpkin) and I very much enjoyed those. Right now I am enjoying the smell of pumpkin bread (also made by the big kids with fresh pureed pumpkin) baking in the oven and figure I’ll like eating that, too.

So there you go. I guess I DO like pumpkin food. Just not pumpkin pie.

We start school at 10 and about ten minutes to ten Cameron said he wanted to read a little book my mom had gotten for him to us. So he was reading and we heard a very loud BANG! We went to the door and could hear a baby crying and could see that an accident had happened in front of our house. We live on a straight bit of road, but people drive way too fast and accidents happen occasionally. Most are not bad. This one was. I told my mom to call 911 and told the kids to stay inside and I ran down the hill to see if I could help.

When they repaved our road they did something very strange. They pretty much got rid of the shoulder and there is now an angled drop off several inches high. A big huge septic cleanout truck had gone off the road and over corrected. A young woman was coming the other direction in an SUV (and, as the police determined later, not even going as fast as the speed limit). The big truck hit her head on. She never saw it coming. She didn’t even hit her breaks. The truck was going pretty fast. The skid mark he made across the road stretches quite a ways.

The young woman had her little two year old in the car with her. A woman who arrived on the scene just after it happened had just gotten the baby out of the SUV when I got down there. The baby was injured, looked mostly like bad bruises, but even with a very poorly installed carseat, she will be okay.

The mom, however, was very badly injured. By the time the emergency people got there (seemed like forever, but I’m sure it was just a few minutes) she was going into shock. I was asking her questions (her name, baby’s name, their ages, etc.) to try to keep her awake until the paramedics arrived.

Thankfully the fuel line did not start leaking until later when the vehicles were cooler and the mom was on her way to the hospital. Had a fire started, we could not have saved the mom. She was completely pinned. It took quite some time for the EMS people to get her out. They used the Jaws of Life among other major tools. After they got her out a policeman told us that she is lucky to be alive. The airbag saved her life.

They decided to chopper her out. It always is an awe-inspiring sight to see a MedEvac land and take-off. They are amazing. They decided to send the baby with the mom. The strange mark on her forehead combined with the poorly installed carseat was a bit worrisome as far as a hidden injury they weren’t seeing right off. The mom had a broken arm, broken femur, and a huge laceration on her leg (she went under the truck a little bit and if the engine was pushed in much more her legs would have been cut off). She was pretty cut up as well and who knows if she had any other injuries that were not readily apparent.

All in all I was only down there an hour and a half, but it seemed like so much longer. I am so thankful the mom survived and wish her the best in her recovery. I decided to cancel school for today. I’m a little shaken up and need the day off myself. My older two had started on their workboxes without me. I was very impressed that they would go ahead and do that. They were happy when I said they didn’t have to do any more, though.

What would I do if I didn’t homeschool? I’d be in serious need of new hobbies. I spend a few hours a day educating the kids and then I also do lesson plans, print and cut out lapbooks and things, and make file folder games. And I totally enjoy doing all that stuff.

On Saturday Cameron turned 8 and was baptized and confirmed a member of The Church of Jesus Christ of Latter-day Saints. He was so excited. His primary teacher (who happens to be someone I went to church with as a teenager) gave a wonderful talk on baptism and Ani gave a nice talk on the Holy Ghost (she wrote it!).

Adrian went through a growth spurt a few weeks ago. Since then he’s been wearing 2T stuff. It’s way too long, but his belly is so huge he needs to wear that size. This weekend we put him in 18 months since it was still in the drawer. Wow, they were tight. My 15 month old has officially outgrown 18 month clothes. Funny that my last is so large since my first was so small (she was wearing 6-9 month clothes – the footed kind – when she turned 2!).

Today is Cameron’s 8th birthday. This morning he will be baptized by Jamie and confirmed a member of The Church of Jesus Christ of Latter-day Saints by my father. My normally calm little boy has been bouncing off the walls for two weeks in anticipation of today. We told him he could choose the 3rd or the 4th for getting baptized and he asked which was sooner. When we said the 3rd he said that’s the one he wanted. And finally the day has arrived. He is one very happy boy! 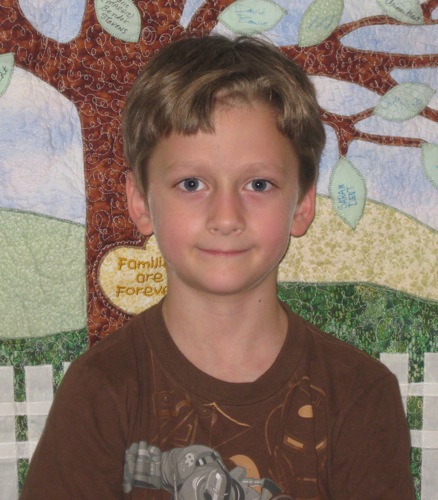 (This is the picture on the cover of his baptism programs.) 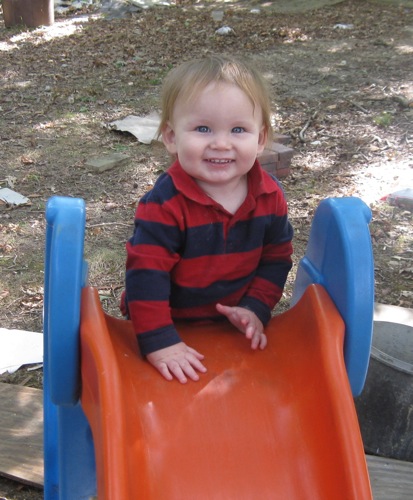 Singapore Math arrived last Thursday. Instead of starting to use it right away, I planned to wait until today (first day of our school week). Ani, however, wanted to get started early and had already done a few lessons.

Today Ani and Cameron happened to get to their workboxes with math in them at the same time. I cannot work with both at once so I said one would have to go on to the next box until I was finished with the other.

And so started the strangest argument they have ever had. They fought over who got to do their math first. They both wanted to do it then and not to have to wait because they were both excited about doing their math.

In the end Cameron won. He had the best argument so I had to side with him. Ani had already done some and he hadn’t so it was only fair he got to go first.