The big kids participated in a handmade Christmas gift swap with some other homeschooled kids.

Cameron got a kaleidoscope and a snowman ornament. 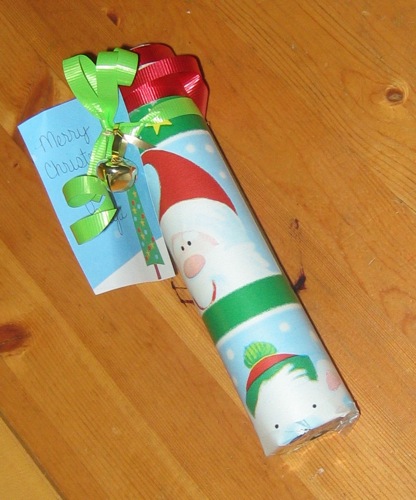 and Ani got a cute little rabbit critter. She named her Emily.

Ani and Cameron made mice with candy cane tails for their swap buddies.

Please stop growing up and looking so pretty. You are only 8 years old and will forever be my baby girl. Thank you for your attention in this matter.

Adrian is 6 months old today. He has one tooth, likes to get on his hands and knees and rock, and is such a happy little one. 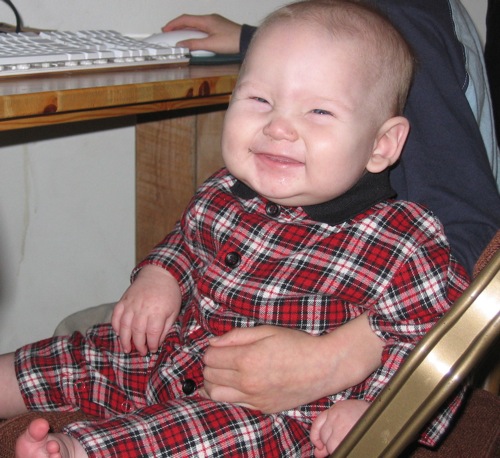 I no longer have an appropriate floor to put my baby down on in the living room. I never appreciated that before. Today I totally do.

We are replacing the carpet on our main floor with wood in the hopes that it will help our health and Fritz’s allergies (he’s allergic to dust mites). We’ve did almost all of the dining room on Monday.

Today I spent several hours working in the living room and got all of the old carpet and padding pulled up. I am SO sore now, but I know it will be totally worth it once the new floor is put in.

I recently did an ornament exchange with some other moms of July 06 babies. My friend sent a beautiful wooden nativity ornament. I love it!

The party was awesome. We’re on the activities committee so we dutifully showed up at 1pm to help set up. It’s amazing how in just an hour and a half the cultural hall can go from being a basketball court to a red and green display of beauty.

After dinner we had people go into different “workshop” rooms. Jamie and I were in charge of the Blankets of Hope through Soldier’s Angels. I had sewn blank squares onto fleece blankets and people got to decorate the squares however they wanted. The blankets will be given to wounded servicemen and women when they are brought back to the United States for treatment. We made 5 blankets. I think they ended up turning out quite nice once they were all finished.

Some of the other workshops were fun, like decoration making or watching Mr. Krueger’s Christmas, but others were also service-oriented. In one room people put together kits for a local shelter and in another room people transformed old Christmas cards into placemats for a shelter. (And, of course, Santa was there before and after dinner – the last two years Fritz screamed when he saw the big guy, but this year he went right up to him without being prompted to and sat on his lap).

After some time to complete the projects, we had a lovely program that included not only the nativity story and singing like we usually do, but stuff about Christ’s whole life. The acts he did culminating, ultimately, with his crucifixion and resurrection. It was quite lovely.

I’ve never been to a ward party before with so much emphasis on service. It was really nice and made the evening extra special and just felt right. For the most part, the ward members I attend church with (us included) have been blessed with a lot (typical of the area we live in) so to give back just a little was wonderful. Our ward activities committee chairwoman really did an excellent job.